The play delves into the lives of Trưng Trắc and Trưng Nhị, the two sisters who led the nation’s first resistance movement against Chinese occupiers in the first century, around 2,000 years ago.

The sisters led their troops on elephants to repel Chinese invasions. Their victories liberated Đại Việt (old name for Việt Nam) after 247 years of Chinese domination. 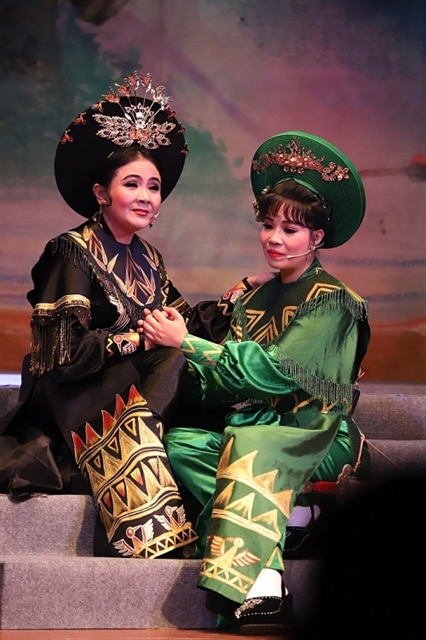 Giàu said he used young performers because he wanted to “refresh the play.”

“In my version in 2022, TiếngTrống Mê Linh introduces the art in both old and new styles,” he said.

The original version of Tiếng Trống Mê Linh was staged in HCM City in 1977. It featured the late talented actress Thanh Nga as Trưng Trắc. The play was performed several hundred times in the city and southern provinces.

Thanh Nga introduced a unique style of cải lương in essaying the role.

Her beauty, voice and dance skills became a phenomenon.

After Tiếng Trống Mê Linh was aired on television, Nga and her art became popular among audiences in Hà Nội and nothern provinces.

She learned the art from her parents, Năm Nghĩa and Nguyễn Thị Thơ, owners of the Thanh Minh-Thanh Nga Troupe, a well known cải lương troupe in the region.

In 1971, she became involved in films. She acted in prize-winning films directed by talented artists such as Lê Dân and Lê Hoàng Hoa.

She received the Best Film Actress Award at the Asian Film Festival held in 1973 in Taiwan.

She was assassinated in 1978 after a show in HCM City and was posthumously honoured as a Meritorious Artist by the Government in 1984.

A street in District 6 has been named after her.

In 2018, a documentary film on Nga and her career between the 1950s and 70s was released on YouTube to pay tribute to the artist 40 years after her death.

The film, which has more than 200,000 views to date, helps viewers, particularly the youth, learn more about cải lương and the art form’s development.

“Thanh Nga was my idol. Her art inspired me to devote my life to cải lương,” said People’s Artist Bạch Tuyết, who has spent more than 60 years on the stage.

“Our new version of Tiếng Trống Mê Linh targets young audiences. We want to encourage the youth to learn more about Vietnamese history and culture through theatre,” Giàu told local media before the play’s premiere on February 15.