Guru Rinpoche and His Eight Manifestations

Lotus-Born master Guru Rinpoche and his eight manifestations are important figures in Tibetan Buddhism. Also known as Padmasambhava, he was invited by King Trisong Detsen (around 755–797) to the snowy land of Tibet. The king called him to tame the local spirits, who were obstructing the construction of the Great Samya monastery.

He tamed the native deities and bound them to the service of Buddhism. He established the great Samye monastery. And he trained many disciples by teaching, performing miracles, and countless supernatural actions. He and his inner circle spread Buddhist teachings throughout Tibet. His yogic and metaphysical doctrines formed the base of the Nyingma, the ancient order of Tibetan Buddhism. It is due to his significant role in establishing Buddhism in Tibet, all the Tibetans call him Guru Rinpoche.

The “Precious Guru”, converted the entire country into a realm of Dharma. 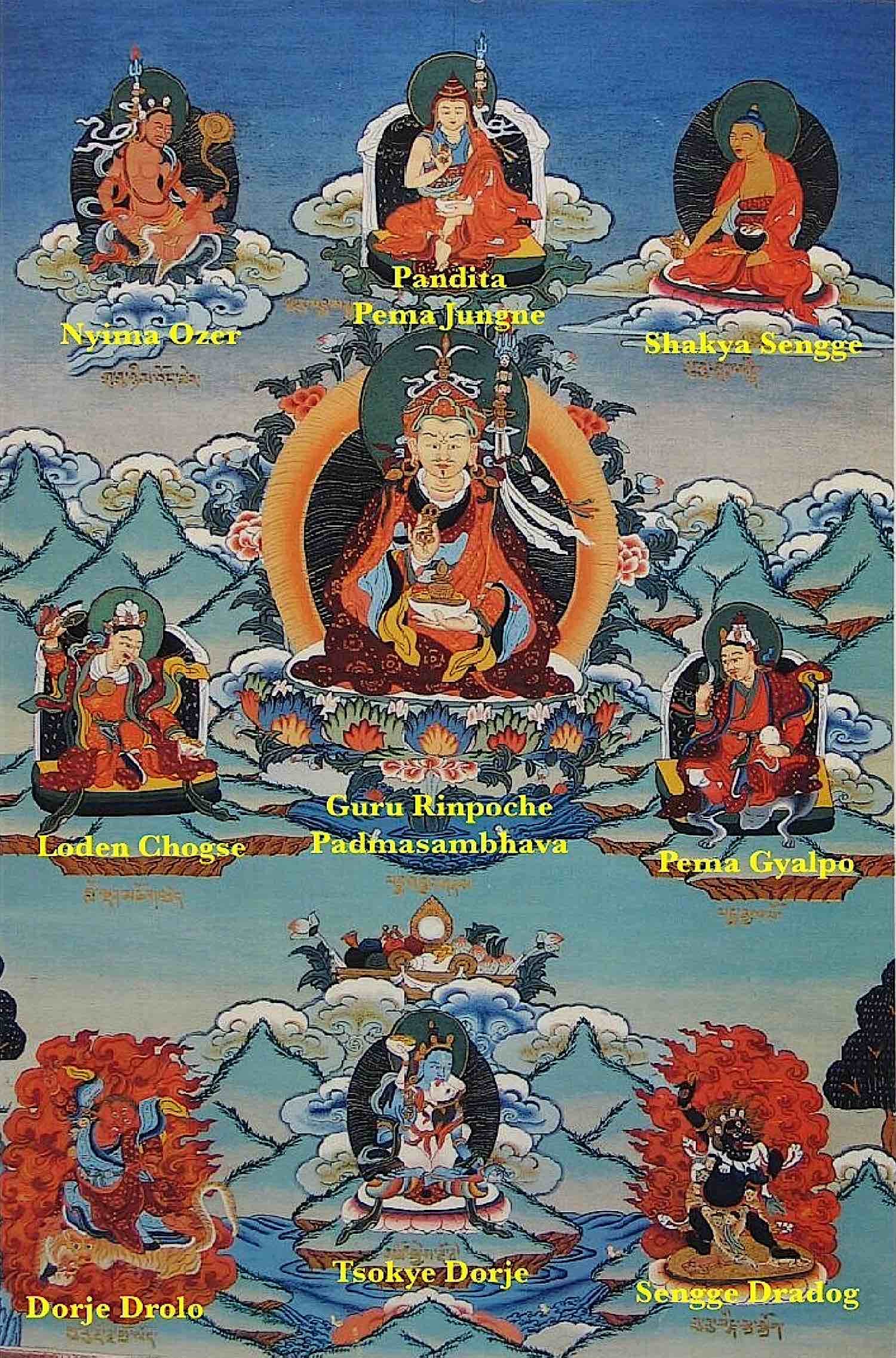 Guru and the Eight Manifestations, in this thangka, is a favored theme of Nyingma art. But it is also found in other sectarians as well. As the Precious Guru is perceived as highly esteemed throughout Tibetan Buddhism.

At the center is Guru Padmasambhava, seated on a lotus seat. He wears his peculiar brocade robes and distinctive Tibetan-style boots. The Sun and Crescent moon on his tantric cap signify his Yogic attainments.

The surmounting eagle feather represents his Great Perfection. Dzogchen, the crown jewel of his Tantric repertoire. His right-hand displays a Vajra which symbolizes the adamantine, indestructible nature of his teaching. The white skull cup rests in his left hand. It contains a vase filled with the nectar of immortality. This indicates his status as an emanation of Amitabha.

Amitabha, as Padmasambhava’s divine exemplar, appears immediately above him in the upper register of the painting.

He seats in his customary manner with his two primary consorts:

Both women wear a chasuble, signifying their royal backgrounds and enlightened nature. Princess Mandarava, “Precious Garland,” is on the master’s right side. She wears Indian garb and holds a vase of long life, which signified her accomplishment of immortality.

Yeshe Tsogyal, on his left, is dressed in the heavier clothing of Tibetan climes and bears a skull bowl.

She was also known as the “Oceanic Victory of Primordial Wisdom.” She was the closest disciple and the spiritual consort of the great master. After attaining Buddhahood, she became a great Guru on her own. But she continued to work alongside Padmasambhava to propagate Vajrayana in Tibet. Together they concealed his teachings as “hidden treasures” (terma), to be discovered when the time was ripe for their revelation.

He received the monastic ordination from Ananda. And he mastered the fundamental body of Buddhist teachings. Reflecting his perfection of monastic purity and discipline, Shakya Senge wears monastic robes. His right-hand exhibits the earth-touching gesture, indicating victory over the forces of Mara. And his left hand supports a begging bowl. 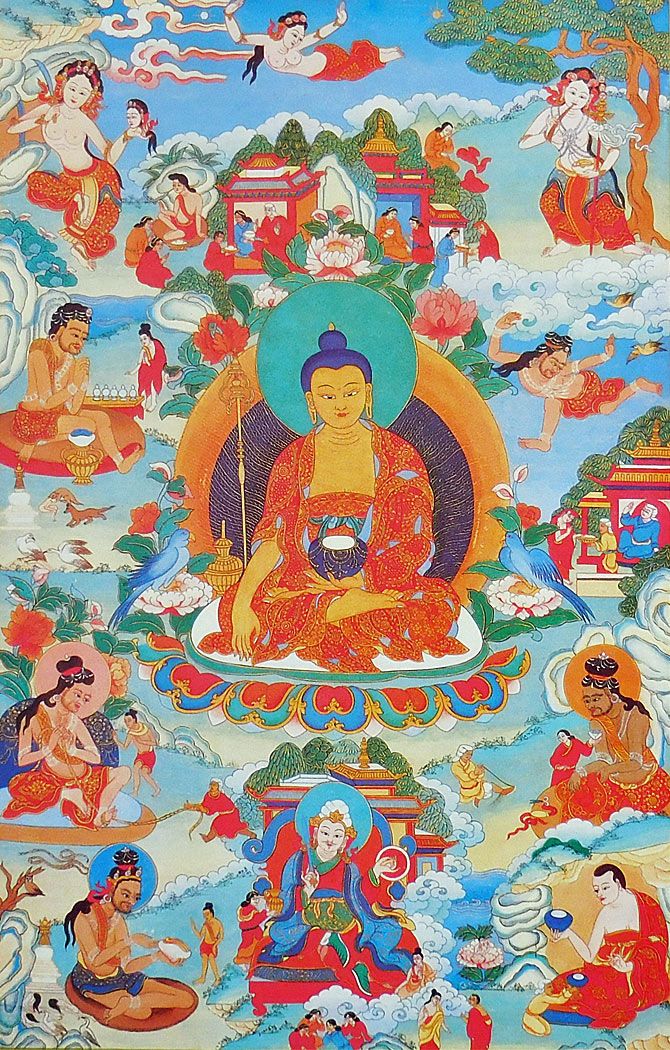 He appears in royal garb. And holds a double-sided hand drum (Damaru) in his upraised right hand and a mirror in his left. This emanation represents his role as the lotus-born youth. During whose rulership brought prosperity and well-being to the Uddiyana Kingdom. 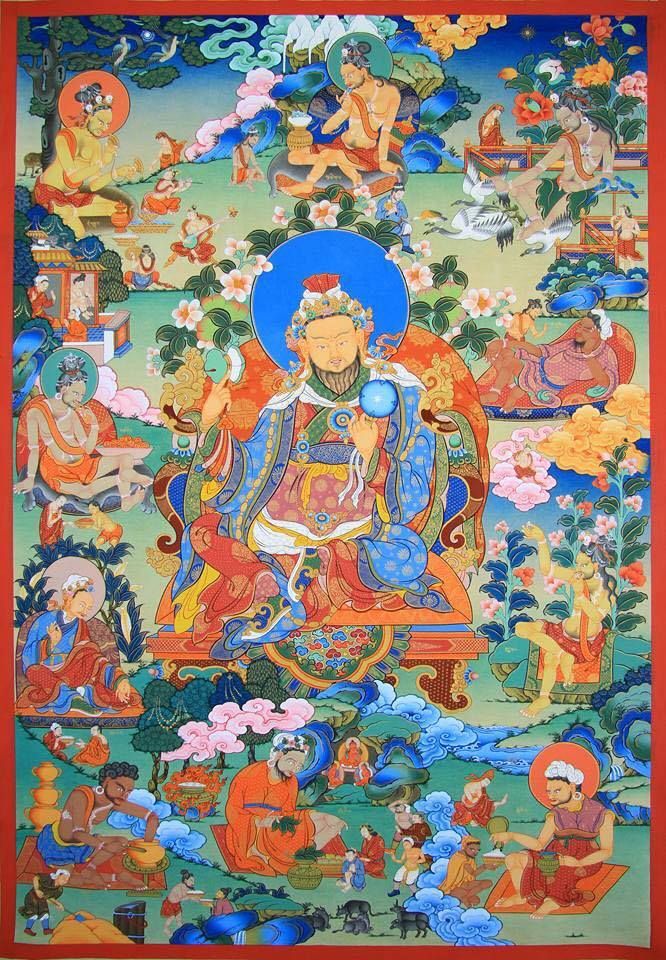 Nyima Odzer, “Rays of the Sun”

He appears as an ascetic or yogic adept, adorned with a skull crown and tiger-skin lower garment. He is identifiable by his golden hue. Khatvanga in his uplifted right hand, and the sun rays emanating from his left hand. He earned this name after teaching the dakinis in the Charnel Ground of Radiant Beatitude in Kashmir for five years. He went Akanishta Heaven and received teachings directly from the Adi Buddha Samantabhadra. 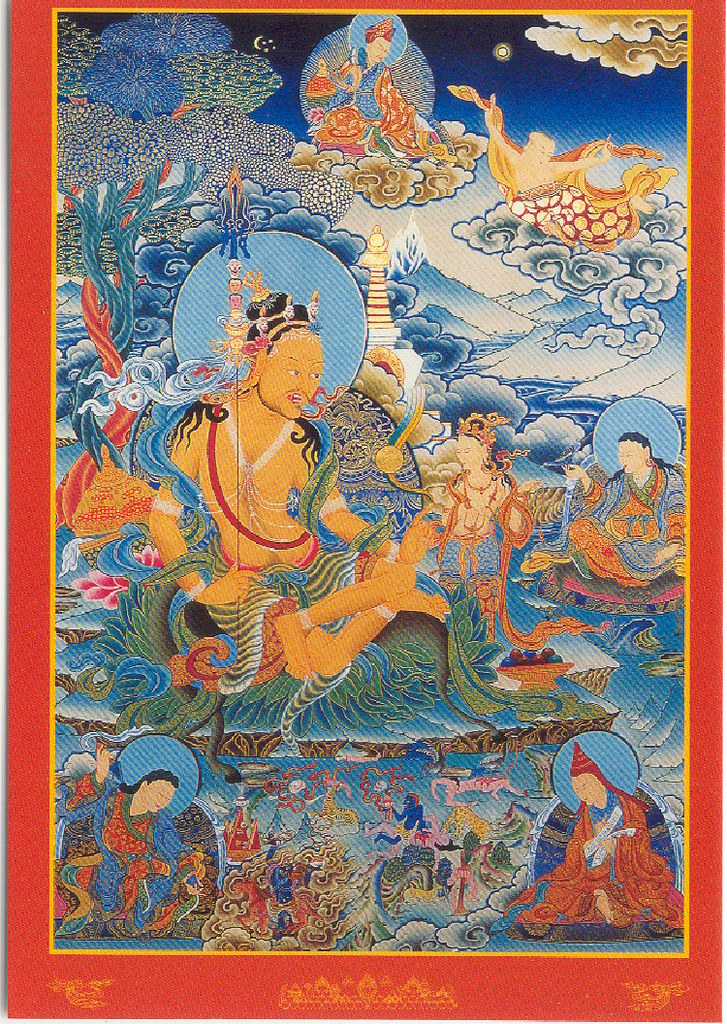 This section gives Dorje Drolo meaning. He appears in the lower right corner. Red in color, he rides a fierce tigress and brandishes a vajra in his right hand and a ritual dagger (phurba) in his left. Padmasambhava adapted this terrifying emanation when he taught the Dakinis in a charnel field in Khotan. He specialized in subduing demons and negative forces. And he is regarded as the Precious Guru’s manifestation of Vajrakila, the Deity Phurpa. 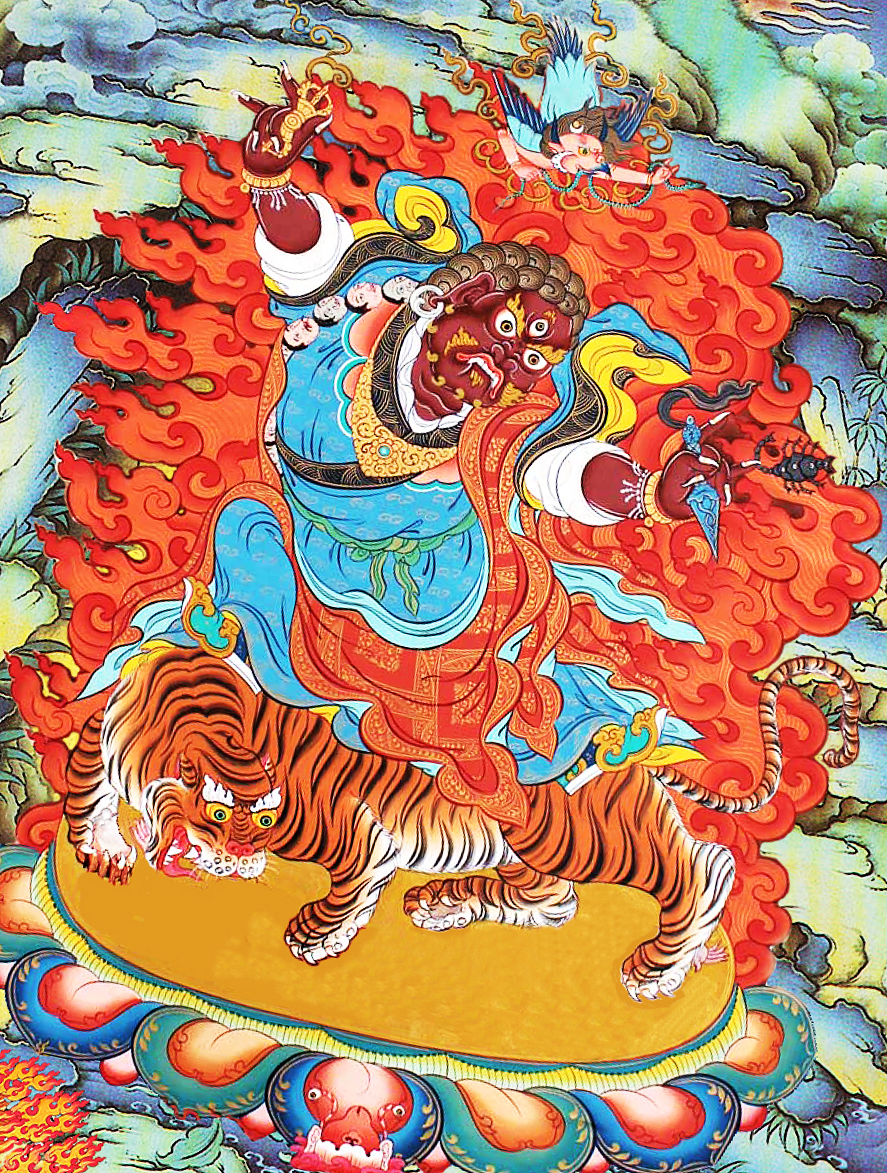 A name was given to Padmasambhava when he won a debate at Bodhgaya, converting many to Buddhism. He is dark blue in color, with a wrathful visage and upward-streaming hair. He wears a skull crown and tiger-skin loincloth. He also has lion skin draped over his upper body. He holds a vajra in his right hand and makes a threatening gesture (Tarjani mudra) with his left. This form taught and subjugated Dakinis in Nepal for five years. He is depicted in royal garb, exhibiting a Damaru in his right hand and a kapala in his left. He is dressed as a Nyingma monk, wearing the characteristic red hat and monastic robes. He holds a skull cup in his right hand and makes a teaching gesture with his left. This indicates his initiation into the Mahayana teachings as entered the Bodhisattva path. 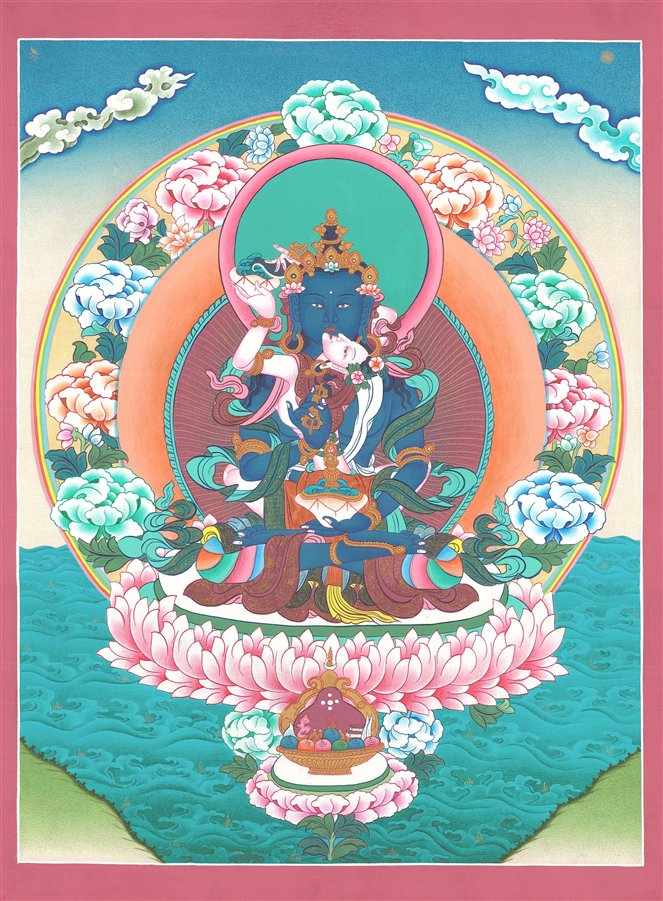 This name was given when Guru received the Mahayoga teachings from the Adi Buddhas in Akanishta Heaven. He is depicted here in union with his consort, Yeshe Tsogyal. They assume the form of a Buddha couple. He is blue and holds a vajra in his right hand and a bell in his left. Yeshe Tsogyal is white and raises her skull bowl with a joyous flourish.

Padmasambhava takes on the aspect of Vajradhara, indicating his initiation into the doctrine of Great Perfection. The lower register of the painting centers upon a seated Lama dressed in monastic robes.

Eight Manifestations exemplify Guru’s ability to express his wisdom and compassion. Appearing in various places and bodily forms, he guides beings towards Enlightenment. Reaching out to them in whatever world or state of mind they might exist in. Such is the aspiration of a great master, motivated for the liberation of all sentient beings. The different manifestations represent his own stages of progress and extensive Dharma accomplishments.

This offers an inspirational model and paradigm for the followers of the Nyingma teachings. And also for all those who revere Guru may aspire.

See a typo or inaccuracy? Please, let us know to fix it. Great thanks!

The Ultimate Feminine Machig Labdron and The Chod Tradition